A Rehabilitation Robot that can sense & feel the patient

A robot that can feel what a therapist feels when treating a patient, that can adjust the intensity of rehabilitation exercises at any time according to the patient's abilities and needs, and that can thus go on for hours without getting tired: it seems like fiction, and yet researchers from the Vrije Universiteit Brussel and imec have now finished a prototype that unites all these skills in one robot. With their prototype, the VUB and imec graduates of the Brubotics research cluster were among the five finalists for the important KUKA Innovation Award 2022 at the Medica Fair in German Dusseldorf.

"In rehabilitation after an accident or stroke, it is very important to train the patient as quickly and as much as possible on certain movements," said Kevin Langlois, postdoctoral researcher at Brubotics. "Especially in stroke, where certain neuronal pathways are interrupted, such intensive and prolonged training is appropriate so that the brain can make other neuronal connections to re-learn those movements."

Usually that training is the work of a therapist, who practices as much as possible with the patient. The therapist perfectly senses the degree to which the patient needs support with his exercises. Unfortunately, those therapists' time is usually limited, so patients actually get too little exercise and rehabilitation doesn't go as well as it could.

"Our robot can partly replace that therapist's support," said Joris De Winter , who is collaborating on the project as a doctoral student. "It has an ingenious cuff, the part that attaches around the patient's leg or arm, which can reproduce all the senses in a therapist's hand and therefore can also sense how strongly the patient is cooperating during exercise. We use artificial intelligence to steer the robot and adjust the level of assistance. Our robotic arm is also strong enough to operate both lower and upper limbs, which is also new, and it can perform very complex and functional tasks for longer than a therapist."

In the meantime, the robot has already been tested and appears to be receiving high praise from therapists at the rehabilitation center at the UZ Brussel, who can start using it after just an hour's training. "The feedback we gathered that way was very useful," Langlois says. "We use it to continuously improve our prototype. The goal is to have a robot ready to be commercialized in five to seven years." 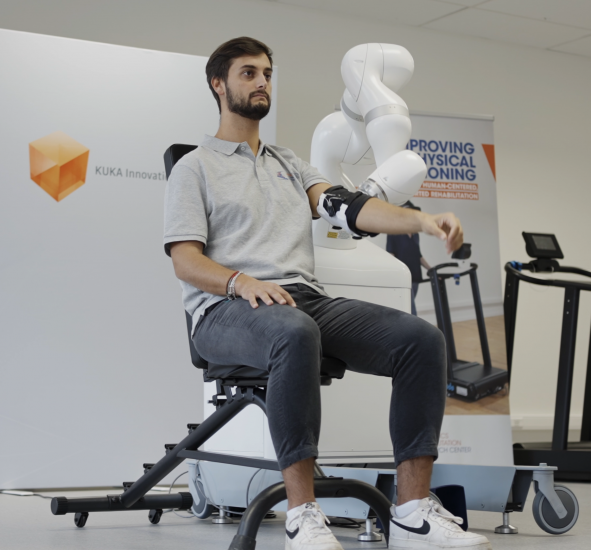